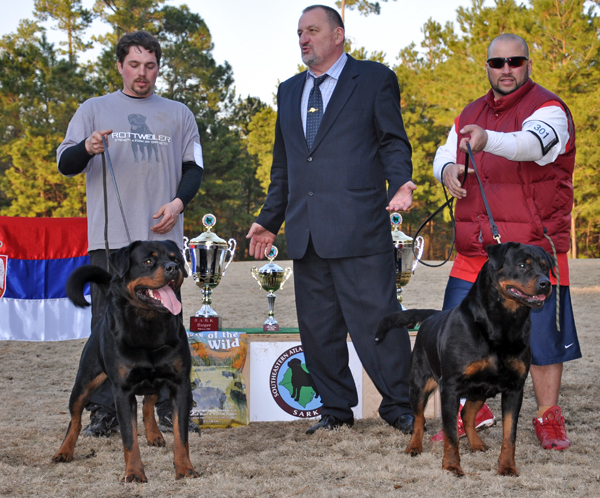 The SARK Sieger Show was held on February 13 & 14 in Charleston, SC. This year it fell on Valentine’s Day weekend. What accompanied the Sweetheart weekend was a blanket of snow covering all of Charleston and part of the East Coast. It was predicted, but what a surprise — snow in Charleston. What sportsmanship came from the crowd! Having to think fast and rearrange our rings, everyone was extremely helpful in our changes and was very much appreciated.

Our judge this year was Dusko Pejovic, an internationally-known judge. His daughter Theodora accompanied him to translate; this was their first visit to the United States. Dusko is a breeder judge from Belgrade, Serbia. You can view his site at www.rottweilervonhausekigen.com

Dusko’s comments for the show: “I would like to say thanks to all breeders and exhibitors who came to the show. Tt was a very large number of dogs, although the weather was not good. All contestants showed very good sportsmanship and dogs were excellent breed type. The show and organization was great and the dogs were of high quality. Once more I want to say thank you all for everything. It was my pleasure to meet you all.”

The SARK Sieger Show was a great success. We sincerely missed everyone who was not able to attend due to the weather conditions. SARK would like to thank everyone that came to our show for their support because without you there is no show.