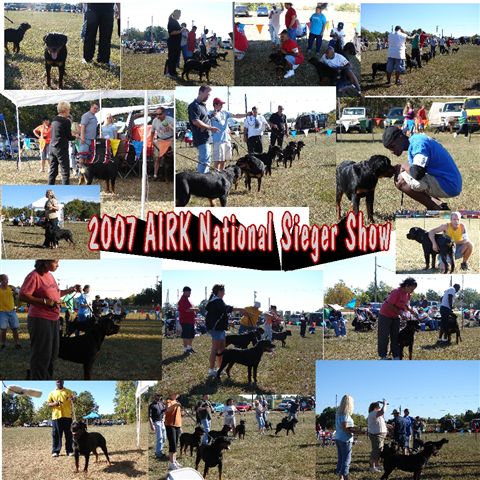 On October 20th & 21st the third annual AIRK National Sieger Show was held in Mooresville/Mt.Ulla, N.C. Hosting the event was the Mid Atlantic Rottweiler Klub. With perfect weather for both dogs and exhibitors an entry of 114 were presented to the discerning eye of Olga Grin, Koermeister, Zuchricter from Kazan, Russia. Her critiques were very thorough and thoughtful, giving the exhibitor and the audience a learning experience.

The MARK club went all out with designer trophies, a variety of food each day, a raffle and a schutzhund exhibit given by Jim Bougie from Jacksonville, N.C. with his SchH II male "Bubba". Photography was expertly handled by Richard & Christina Meacham and Kevin Rogers. The members of the club from Janice & Larry Lackey (hosts for our judge), Dwayne Martin, Ben McMillan, Barbara Johnston, Richard & Sue Shuler and of course our always efficient Mike Ellis as ring steward, handled the event like the professionals they are. Many thanks to them and to Sina Norris for her recording of the critiques.

Also notable was the wonderful sportsmanship from the exhibitors - we look forward to seeing all of you again next year. Thanks for coming.