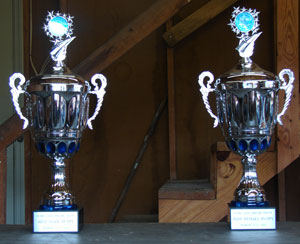 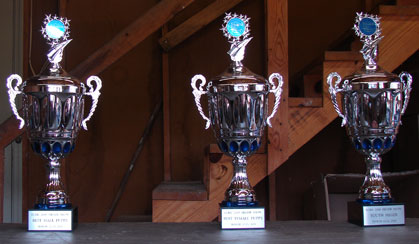 Sieger and Siegerin trophies and other trophies awarded

International Judge Chantal Delafontaine of Belgium said she looks for a dog who displays the most harmony with the build when she is in the ring choosing champions.

The East Carolina Rottweiler Klub is hosting its 2008 Winter Sieger Show at Onslow Pines Park this weekend, with 116 entries from several states. This is the seventh year for the club's show.

"The Klub's goal is to promote and inform the public about the breed," said Sina Norris, ECRK's secretary.

One rottweiler breeder, Michael Stuckeenberger, traveled from Germany to see Evie and Manson Johnson show Djuke vom Vilstaler Land, a 6-year-old male he sold to the Johnson family last November. Djuke has already won the most prestigious awards internationally and has produced several offspring that Stuckeenberger keeps in Germany.

Puppies and youth dogs were shown Saturday. Best male and female puppies, and best youth Sieger (male) and Siegerin (female) were chosen and awarded trophies, first through fourth places, at the end of each group's event.

At the finale, two adult rottweilers from the groups will be selected as the 2008 Eastern Carolina Rottweiler Klub Sieger and Siegerin.

Kimberly Cardona of Orlando, Fla., entered Redwood Krest's Xaver, her 7-month-old male, in the show and said she travels all over the country with her dogs.

"These are our kids," she said. "We travel all over the country to enter shows. Everybody knows everybody here, and it's like a family - and we're very protective of the breed - we help each other any way we can. We're still very competitive, and we don't always agree on everything, but we all work together."

Catherine Varidel traveled from Georgia, even though she was just there to help. Her 7-year-old male rottweiler Elric was at her side at all times. Varidel has postpolio syndrome and Elric is her therapy-assistance dog. She was proud to say that Elric had received the 2006 American Kennel Club Good Samaritan award last year. He is not only her therapy dog, but she shares him with others, since Elric is willing to spread around his gentle love.

Back in the ring, Delafontaine said she looks for several things.

"The first thing you see is the expression and the head - you look for something in the eye, a sparkle, and an expression that is proud. Then you look at the way the dog moves and its power and the ease (with which it moves)," she explained.

After she inspects the dogs once over, she takes each dog individually and critiques the whole dog from front to back and compares it to the standard. A teaser toy is used to keep the dog's attention and help the dog present itself, as she goes down a list: back, head, muscularity, hair, ears and so on.

"The real beauty of a rottweiler comes when you are working the rottweiler, because it is a working dog. They track, do obedience, agility, search and bite. A dog must be very well-balanced in their head before they do bite work," Delafontaine said.

Gaye Bougie, the vice president of the ECRK and a trainer for the breed, said owning a rottweiler is all about obedience. "The main thing we're trying to do is promote the breed," Bougie said. "They can be gentle giants, but you have to teach them obedience and you have to give them a job. You have to motivate them and reward them, and get the whole family involved when you have a puppy," she said.

"It's also very important to socialize them - with people, children and other dogs. The rottweiler is a very stubborn dog, so you must have a firm hand - but not beat them or be cruel, I don't mean that. Love them and give them attention, but they are animals and they need to know you are the head of the house. They're wonderful dogs but as Gaye said, you have to give them a job."

The public is welcome at today's event, which has free admission, to watch the final day's events unfold.